You are here: Home » Blog » Snap Spectacles – A Key Lesson in Demand Forecasting? 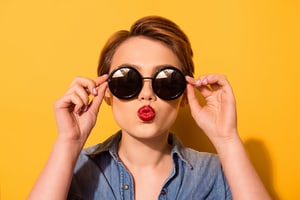 Snap – the umbrella organisation which includes the Snapchat social media platform – launched the Snap Spectacles in 2016. This was their first foray into a hardware product, and are a type of video spectacle which can be linked to their social media platform. Yet there are some discrepancies emerging between the press releases from Snap, and what’s actually going on with the product.

Spiegel announced to the Vanity Fair New Establishment Summit that he had expected to sell 100k spectacles by now, but has in fact sold more than 150k. But there are reports that this isn’t an accurate portrayal of the state of affairs, and that in fact there are “hundreds of thousands of the camera-loaded smart glasses sitting unsold in a warehouse.”

This contradiction to Spiegel has been reported by The Information. It also comes at a time when Snap Inc. has announced that eighteen recruitment employees have been made redundant and that future hiring is slowing. This is combined with Snap also introducing formal performance review systems which they haven’t used previously, and talk of more cuts being made.

The result is that the share price has taken a hammering, falling below the initial $17 price for the first time.

Why Are the Specs a Problem?

When the spectacles were first released they were brought to the market in quite an unusual way. They didn’t head to retail outlets, either physical or online. Instead, they were initially only available through pop-up vending machines. This implied and created, a limited supply. The result was that some keen to own individuals turned to eBay and were paying as much as $1000 for them.

However, despite this cult-type hype to get them, the limited supply actually seemed to have the effect of switching off the interest. People didn’t think they were viably going to be able to get their hands on a pair so got on with their lives. The result is that despite them launching in UK stores earlier this year, there hasn’t been a huge amount of demand. The wider availability hasn’t translated into greater demand and, according to businessinsider, sales are continuing to slip.

However, it’s more than just the sales tapering downwards far sooner than was anticipated. It’s thought that those which have been sold have done so at a loss. Indeed there is a report which claims that the hardware company which was bought by Snap in advance of the release of the Snap Spectacles had a price tag on the product which was over double that which Snap are now charging.

Snap aren’t the first tech firm to have stumbled into attempted hardware releases and made mistakes. Both Facebook and Amazon have attempted to release phones and struggled. Google indeed was planning its own ‘smart glasses’ before back-tracking and releasing them instead as a business product.

What We Can Learn and Apply in Our Supply Chains

There are some interesting lessons to be learned on the back of Snap’s spectacle issue. What’s more, Snap really was in its infancy, and these lessons could have been learned by them before making the mistakes themselves.

The first mistake was to overlook the glaringly big issue of seasonal fluctuations. Tech gadgets, in a way which few other products rival, have an enormous Christmas spike. The demand in the run-up to the Christmas holidays for tech gadgets really is the time to utilise. However, anyone who is familiar with the industry also knows that, following Christmas, sales will pretty much flatline. Snap, however, believed that demand for the specs would continue even once 2016’s Christmas had been and gone. That simply was never realistic. Even the tech hardware pros whose products are eagerly anticipated would not expect that.

Snap could have learned from other gadget makers to realise this. It’s not a secret that demand forecasting and inventory management is an intensely difficult part of the supply chain process for hardware companies to get right. It was a rookie mistake.

What comes next is that Snap will likely have to sell the Snap Spectacles it’s got sitting around at a discount, in other words sell off its inventory at a loss, simply to move them. Beyond that Snap also has around $29m purchase commitments in the pipeline which are related to hardware inventory. They’ve already effectively signed on the dotted line. So, it’s not just the current excess inventory that’s a problem but also what’s still to come.

We need to learn from this about learning itself. We cannot, in the globalised marketplace, operate in a bubble where we make mistakes and learn from them. Instead, we need to learn from the mistakes of others and never step outside of the tramlines. The margins for error are now too tight. Therefore, we need to take the time to look beyond our own four walls and blinkered expectations and look to others in similar industries with similar products and see what has worked and what hasn’t for them.

The Future of Snap

Snap really is the baby of the tech group of companies. Nonetheless, it’s had something other businesses have wanted a piece of. Snapchat specifically has been subject to enormous competition from other platforms such as WhatsApp, Facebook and Instagram who have endeavoured to mirror the Snapchat features which have been immensely popular.

Analysts watching the situation unfold are beginning to liken the future of Snap to that of Twitter. Twitter too slumped against investor expectations despite retaining and growing their user base.

However, it’s not just Snap who are struggling. Other tech companies, notably those with more experience, such as Google, Microsoft and Facebook, have also had to announce losses in their share prices. Snap is certainly not alone in struggling to retain its value. It’s certainly a company to watch and learn from.