You are here: Home » Blog » How Flying Drones Are Revolutionising Warehouses 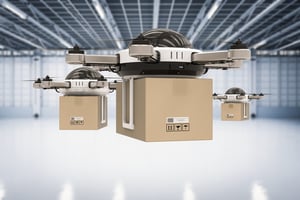 It’s no longer a thing of the future – flying drones are now buzzing around our warehouses, and revolutionising the whole process. Whereas, not that long ago, warehouses were both labour- and plant-heavy, drones are now capable of carrying the weight, often literally.

Of course, the fear is that with the increased availability and use of warehouse drones, we’re putting previous warehouse personnel out of work. Is that the truth? What changes are drones really heralding?

The problem is, that for many large-scale retailers and industries their warehouses are mammoth. If you’re only dealing with a small stock room out the back, of course, you can easily keep tabs on what’s where. However, for a vast number of businesses things are on a far greater scale. Keeping track of items, and accessing them, becomes a far harder affair. Typically, this will involve complex warehouse management systems which need to be manually checked to locate the right spot in the right aisle. Then the trucks and personnel have to mobilise to the spot, get the item, and move it where it needs to go.

A drone, on the other hand, can, by being linked using RFID technology, can be operated remotely at the click of a button. It can scan and send the data to where it needs to go in record time. You can’t lose track of items. They have the potential to do the job that staff and MHE used to do in less time, more efficiently, and more accurately.

Why is this Important?

Part of running a supply chain operation, and balancing the figures, has always involved accepting loss and wastage at the warehouse level. Items are regularly misplaced, get damaged, or remain unsold. This is old hat for your accountant. However, every £1 written-off, even though you’ve factored it in, is still directly eating into profits. Often staggeringly so. Therefore, any chance you have to widen that margin, so errors and wastage are less consequential, is important.

We’re not talking about a small improvement here either. Whilst any improvement is of course welcome, we’re talking about significantly enormous benefits of using drones over people. Every item which needs scanning is a point in the warehouse operation for a mistake to occur when people are in the mix. Use drones and you should be looking at 100% accuracy. In real terms, this is also added to the fact that two drones can undertake the work of 100 humans in the same time period – that’s truly staggering. If you’re looking for the business case for drones, you have it right there.

The success comes through the drones’ use of smart data. Whereas a warehouse worker is limited and dependent on the warehouse management system, the drone directly connects data back and forth, analyses results, spots problems, and delivers incredible insight. It’s possible to see how they could generate significant operational savings when it comes to the bottom line.

The Types of Drones

Now that drones have been buzzing around our warehouses, and our headlines, for a while, they are no longer the reality for only the Amazon wannabes. We also have more choice.

Pinc offer drones that are fuelled using hydrogen fuel cells instead of batteries. One of the biggest original problems of drones is their constant need for recharging. However, Pinc’s can fly for up to 2 hours at a time, meaning that they last four times longer than battery-powered drones.

Then there’s EyeSee by Hardis. EyeSee does all sorts of clever stuff, but the drone is very interesting. It’s been designed to automate the entire inventory process: no humans needed. It uses an on-board camera along with geolocation technology to whizz around the warehouse. It then ‘maps’ the inventory using every different type of barcode there is. It’s managed via an Android app and is highly user intuitive.

Are Drones Just Robots in Disguise?

Warehouses are no strangers to robotics and automation. In many ways, they are frequently the frontline testing ground. Are drones just another robot in disguise, not necessarily adding anything new to the party?

Well drones are the natural evolutionary step up from the robots who have been doing a good job with the resources they had. However, as with all developments, they can’t keep pace with the newer high-tech drones. Nonetheless, they can in many ways be symbiotic. Drones and robots can both become integral to improving efficiency and accuracy in the warehouse, with inventory, and throughout the entire logistics process.

But yes, ultimately, this tech wizardry removes humans – after all, it’s in humans that the problems of accuracy and efficiency lie. It’s eye-opening to learn that the ecommerce industry is worth $2.4 trillion, and growing, yet nearly 75% of ecommerce companies only employ up to four individuals. Positions in warehouses are looking set to become as rare as hen’s teeth. The combination of technology, automation, and artificial intelligence is proving to be a mix that humans simply can’t compete with.

However, it’s not all bad news for employment figures. This new technology, whilst also considering its own development processes, does create new jobs. They just look different, and arguably there aren’t as many. Those feeling positive about the issue believe that the current reduction in warehousing jobs due to drones will only be a temporary dip before the emergence of new, skilled roles.

Additionally, drones and other technology mean warehouses will have considerably less downtime. Drones don’t need to abide by working hours or need sleep. They reduce accidents because they are still functioning as efficiently just before their recharge break, as they were when they first set off. Warehouses will be able to operate continually, which of course adds to our consumer love of all things instant.